How to define ‘Gifted and Talented’ (COGAT)?

Program/ PACE or GT Program.  Gifted and Talented  or GT/ PACE programs are for the kids who are considered gifted.  Texas Education Agency states: A “Gifted and Talented” student is a child or youth who performs at or shows the potential for performing at a remarkably high level of accomplishment when compared to others of the same age, experience, or environment and who exhibits high performance capability in an intellectual, creative, or artistic area, possesses an unusual capacity for leadership, or excels in a specific academic field. The CogAT is Cognitive AbilitiesTest which helps in measuring child’s ability and Iowa Tests of basic Skills is the best measure of kids achievement at the particular time of testing.

When does the process of GT screening start for Identifying GT Kids?

Most of the GT referring and Screening is done during fall, September and October. The  parents can nominate their kids for GT or kids can also be referred by the teachers. The factors that can help in identifying whether your child belongs to GT category is through talking to the teachers about your child’s specific skill development, classroom performance and your child’s maturity level.

What is the Test about?

Forms or versions of CogAT

There are 6 and 7 versions of Cogat Tests which are used by schools.  Most of the schools use Form 6 due to budget constraints, The Form 7 version came out in 2011 and is also used by some school districts, The cognitive areas tested are still the same, however there is a difference in different levels at which each grade is tested, One big change between the CogAT Form 6 and Form 7 was the identification of levels.  In Form 6 children took the Primary K, 1 or 2 or the Multi-Level 3, 4, 5, 6, 7,8, 9, 10, 11 or 12.  In Form 7 levels have been standardized to correspond to the most likely age of the child taking the test hence we have CogAT From 7 levels 5-17. The CogAT® comes in two distinct formats.  The Primary/Picture Format version of the CogAT® is administered orally for lower grades.  This version is generally used for kids who are not fluent readers . The Multi-level/Text Based version of the CogAT® is used with older children from ages 8 and above.

How to get kids ready for CogAT?

The CogAT questions are never released like state tests and do not have a set curriculum. The test is based on identifying critical thinking skills among kids learned in school and outside environment. CogAT  tests  the ability of  kids which are particularly higher and it is not an identification of higher IQ. The best way to get kids ready for this 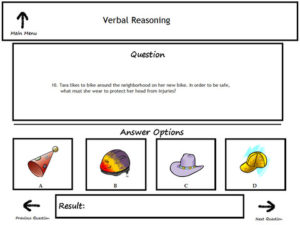 test is to practice all the cognitive areas on which they will be tested that are verbal, non verbal and quantitative. Familiarizing kids with the format of the test and the kind of questions to expect also helps kids in performing better on the test.  There are many practice tests on the internet which prove to be a good our.

We at SMARTS Club can provide you the resources to help your kids achieve the higher order skills necessary to perform their best on these tests. We also train  our kids at test taking skills which help them  focus and keep calm during the test. Contact us now for details about our GT/PACE prep program and get free CogAT practice sheets for your kids today