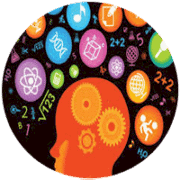 According to Gardner’s theory of learning the different types of skills that any child learns include visual, spatial, linguistic, verbal, logical and mathematical that are important for reading reports to being a good data analyst.  The importance of these cognitive skills is critical in making our kids successful and also build the foundation of their learning ability.

An ability to visualizing things. Being good with maps, charts, plans, and diagrams. The visual-spatial ability is becoming increasingly important with the development and proliferation of new technologies such as imaging, computer graphics, data visualization, and supercomputing.

An ability to use words effectively both in writing and speaking. An ability to easily understand written work.

Through this course, your child will learn the strategies to master the skills
to understand the relationship between words through analogies, classification, and context clues.
to interpret the different patterns, observing spatial positioning of objects, understanding laterality and directionality.
to logically reason out data through sequencing, number equations, and analogies.