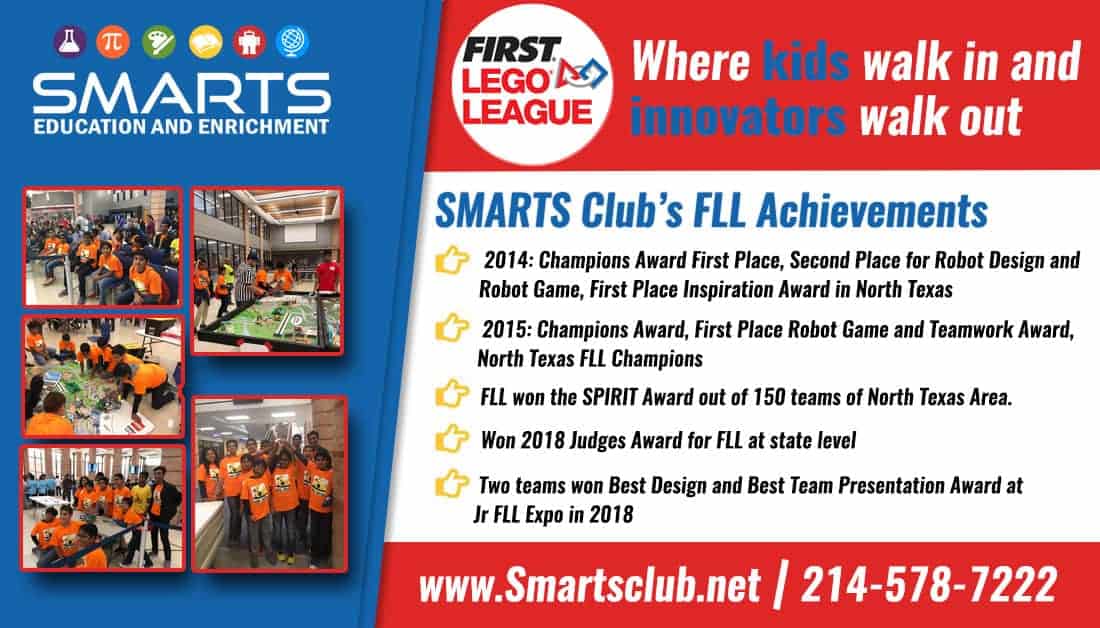 SMARTS Club is the premier location for robotics classes in the Frisco area, and it’s easy to see why. We have award winning Jr. FLL and FLL teams that compete in real LEGO Robotics competitions each year. This fun and engaging class has more than meets the eye, though; teaching each student critical STEM concepts and teamwork skills that they will use throughout their lives.

The classes are organized on basis of skill levels of the student. Level I covers basics of engineering and concepts of simple machines. Level II has projects based on simple machine and basic programming with sensors, sounds and motors. Level III is much more complex and builds on the skill level learnt in past two levels

The Simple Machine: These classes ignites your students’ desire to learn about science and engineering concepts with a wide selection of engaging activities, including: observing and investigating simple machines, following a design brief, and working with observing, reasoning, predicting, reflecting and critical thinking.

We Do : Students will investigate, build, and interact with basic robot designs and concepts through the use of Lego We Do. Students will improve communication, collaboration, and problem-solving skills as they learn  No prior experience requirement

Lego EV3 Mindstorms : Students will have their first experience with the high tech Lego Mindstorms EV3 robotics platform. Here, students will engage in (STEM) Science, Technology, Engineering, and Math, and Computer Science as they build, program, and test their first robot with the EV3 Windstorm

FLL stands for First Lego League. This is a competition group that inspires children to be creative and think like scientists and engineers with hands-on learning. Children build self-esteem and confidence while working as a team on a specific robotics project. This project is then presented at a seasonal competition where students talk about the project and show off the robot they have created.

There are two leagues SMARTS Club participates in; Jr. FLL, for ages 6 to 9, and FLL for ages 9 to 14. Our robotics class incorporates many facets of learning like:

SMARTS Club FLL classes are held each Saturday at 2:00 pm. These are at our West Frisco location with our amazing robotics coach!

FLL – How it works